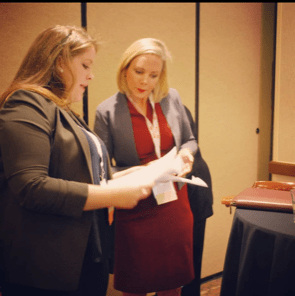 You will see us periodically post on interview tactics and how to present your best self. Most of this page will be equally useful to men and women.

Standing Up for Business Protocol

This is not only important in interviewing, but also for creating future opportunity in the workplace. When the interviewer, regardless of title or position, enters the room you must stand up and shake their hand. Other than your overall appearance, it is the first clue that the individual understands appropriate business protocol. Also, stay standing until you are offered a seat. If no such offer is made, sit down after the interviewer is sitting.

Not only is this appropriate for interviewing, it is also applicable once you are inside an organization. I have witnessed careers blown by simple business etiquette blunders.

About a year ago, I met with clients at an American firm that had recently been acquired as a subsidiary by a European parent company. The CEO and CFO of this subsidiary had grown this particular company together for the past decade.

At our first meeting, the CFO along with another key VP was waiting for me in a conference room. When I entered, the VP stood up to shake my hand while the CFO elected to shake my hand from across the table while remaining seated. After our initial handshakes, I stood to wait for an invitation to sit, but such an invitation was not forthcoming.  Realizing standard business etiquette was not being practiced here, I decided to take a seat on my own. When the CEO entered the room I stood to greet him, and so did the VP.  The CFO stayed seated and merely made eye contact to say hello.  The CEO motioned for us to sit signaling that the meeting could begin. It was clear that the VP and CEO, at least, were aware of business protocol.

As if to make up or for the CFO’s lack of manners, the CEO spent time outlining the CFO’s many accomplishments and positive attributes. According to the CEO, the CFO was extremely sophisticated with transactions. He had IPO’d two companies and divested another. He was a competent switch hitter, flexing his international consulting firm CPA on the accounting side and his top ten MBA on the finance side. It was clear this CFO had talent, but his lack of business etiquette and consequent lack of presence were still off-putting.

We concluded the meeting with everyone standing shaking hands and leaving, except, of course, the CFO. He remained seated but cordial.

In a subsequent meeting with the European parent company, the traditional business protocol was followed. With those established ground rules observed, the meeting was quite productive: I gained a full understanding of the company, its mission, and my role in getting them there. We stood, shook hands, and thanked each other for the time. Credibility did not have to be established through an explicit recounting of previous work experience and attributes because we had established ourselves through our actions of observing appropriate etiquette.

A month later I received a call from the CEO of the subsidiary. He told me the parent company was not happy with the CFO.  Shortly thereafter, we replaced the CFO with a candidate who may have been less qualified on paper but who stood up when I and others entered the room, demonstrating an understanding of etiquette and of how to establish a presence.

The moral of this tale is that if one is talented but lacks an understanding of general business etiquette or simply chooses not to observe it, the resulting faux-pas can be dismissed by presence and vice versa.  But talent without etiquette and the presence it confers can simply be dismissed.