This is the first part of a four series blog regarding the four military men that shaped my professional career. It’s a tribute to those that have made me emotionally tough enough for business.

“Feet on the floor, Theodora”. Those are the words I heard every morning growing up if my dad beat my alarm clock. He wasn’t there to be my friend or pretend to be my boyfriend, like so many of my friends’ fathers. He was there to teach me discipline and how to be an adult.

While my dad grew up in a family of resource, he did not rely on it. Upon graduating high school he joined the Air Force Academy to pave his own path. The Air Force Academy has a philosophy that first you need to be a great follower. Then you can become a great leader. He flew in Vietnam and returned home to fly jets for Delta Air Lines. He took his G.I. bill and went to Law School. He practiced law and flew with Delta for over 30 years.

When your father is an attorney/pilot you may anticipate that his youngest daughter might reap some reward of his financial success. Being the fourth child, his patience at that point was spent and he relied on the style that suited him the best – military. I grew up in an affluent town and ran in “popular” crowd. I recall being jealous of my friend’s father’s in the sense that they would spoil them with gifts and attention. I

Derek Lam coat outside of the Chapel of Cadets at USAF.

remember a friend of mine receiving a new

convertible BMW for her 15th birthday. On my 15th birthday, I was permitted to find a job to pay for the things I wanted. So, I worked a lot and sometimes late and that’s when I’d wake up to “feet on the floor, Theodora”.

My friend’s parents would also be involved with their teachers. If the child disagreed with the teacher, the parent would get involved. I would see my friends’ parents show up at school and verbally shake a fist at teachers for their kids. I recall once that I had an issue with a math teacher, and I brought it to my father’s attention with the anticipation that he would handle it for me. His response to me was, “he has the grade book, so he is in control.” Essentially my dad said that he wasn’t willing to help me. I thought it was cold, but I decided that I would talk to the teacher myself. It didn’t work out the way I wanted it to, but it taught me a lesson in the chain of command.

Even with food in the house, he was militant. If you didn’t like what was on the menu, or you had a special request for the grocery store it was met with silence. If you wanted something that was off the meal-plan than you had to buy it yourself. I asked him once if he’d pick me up some salad dressing if I paid him for it and he said, “I’m not going down that aisle, you need to pick it up yourself”.

We had a lot of rules regarding cleanliness and chores. Most of my friends had maids or a stay at home mom that handled that type of stuff. On Friday’s if I wanted to do something after work he would ask if my room was ready for “inspection”. He’d halfway joke about breaking out the white gloves, but I knew he would if he thought I had slacked off so even the lampshades were dusted on a weekly basis.

My father did do a good job of telling me that he loved me. He said it, and still says it, all of the time. But growing up, he was raising me to be self-reliant. If I wanted anything, I was going to have to work for it. This skill has directly translated to my success in the workplace as an adult. He taught me some key military values: nobody deserves special treatment, handle your own problems, and if you want something, you need to work for it. 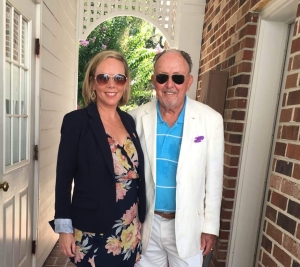 Simple floral with an affordable blazer from Target

As a woman in business, I learned these fundamentals at an early stage which has propelled me forward. Every morning I wake up with a voice in my head saying “Feet on the floor, Theodora.”

This site uses Akismet to reduce spam. Learn how your comment data is processed.